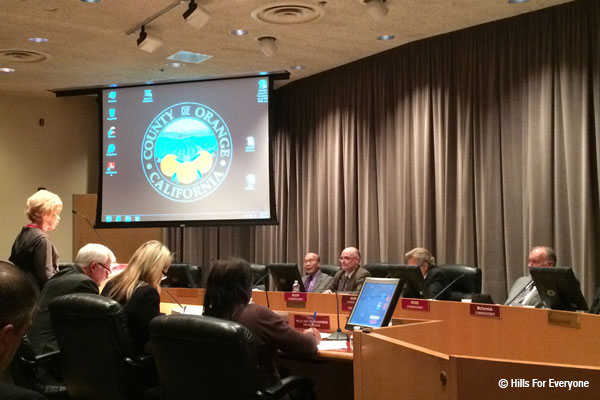 The Orange County Planning Commission, consisting of five members representing each of the five Supervisorial Districts in the County, considered an application by Esperanza Hills developers to build 340 homes in the foothills above Yorba Linda. After over two hours of public comment opposing the Esperanza Hills project, the Planning Commission voted unanimously that the project and the environmental documents were sufficient to recommend approval to the Board of Supervisors.

Over 65 people wearing red (in opposition to the project) were in attendance for the hearing.  Eighteen individuals gave passionate, heartfelt speeches to the Commission as to why the development should not be approved to proceed to the Board of Supervisors for further consideration.  Even those that had not contemplated speaking, rose to the occasion.

The Board of Supervisors will hear the project on March 10 at 9:30 AM at 10 Civic Center Plaza in Santa Ana.