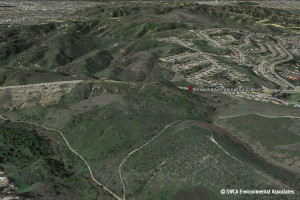 Habitat fragmentation is one of the most serious threats to biodiversity worldwide One of the principal factors contributing to habitat fragmentation has been the construction of roads and in southern California, the effects of roads on wildlife populations and movement have been well documented. Wide-ranging species such as large carnivores are particularly vulnerable to localized extinction in fragmented habitats because of large home ranges, low densities, slow population growth rates, long range dispersal, and direct persecution by humans.

To counteract the negative impact of roads on wildlife, different types of techniques have been identified to maintain or enhance wildlife connectivity while providing safety to the traveling public by reducing the threat of wildlife-vehicle collisions. The safest technique for both wildlife and drivers is to prevent wildlife from accessing roadway surfaces and use other structures such as underpasses and overpasses to allow for animal movement across roads.

Specifically, the numerous roads that bisect the Puente Hills and open space areas to the east may inhibit movement of larger mammals, either through impeding normal movements of
individual animals in search of resources and mates, impeding animals in moving away from or into recently burned habitats, or through death and injury by being struck by vehicles.
The portion of Colima Road within the city of Whittier north of Mar Vista Street and south of Hacienda Heights is a contrast in roadway design that can facilitate safe wildlife passage
across the roadway. Numerous road kills of carnivores and deer have been documented and observed along this northern portion of Colima Road.

The need for a structure along upper Colima Road has been identified to provide an additional opportunity for wildlife to safely travel across the road as they respond to existing (e.g., recreation, noise pollution, light pollution, and development) and future (i.e., oil extraction facility) threats to wildlife movement.

From November 1997 through February 2000, Lisa Lyren examined the home range characteristics, underpass use, and vehicle-related mortality patterns of coyotes and bobcats primarily along the 71 Freeway. Lisa captured and radio-tracked 29 coyotes and 4 bobcats.

Over half of the coyotes and half of the bobcats had core-use areas that overlapped the 71 Freeway. Lisa determined that coyotes used underpasses significantly more than bobcats.

During 1997-1999 the Wildlife Corridor Conservation Authority and CalTrans funded a monitoring program for animal movement. The purpose of this study was to identify certain key animals and to study their distribution through the Corridor. Bobcat, coyote, deer, and gray fox were the target species. Understanding their movement and abundance, (or lack there of), would contribute to understanding of the health of the ecosystem.

Chris Haas performed the two-year study as part of his graduate studies at Cal Poly Pomona. Chris divided the Corridor into a grid and measured animal presence on a regular schedule. He would spread gypsum powder in a two foot square and then place a rock with an attractive scent. Each day, for the next five days, he would return to the site and read the tracks of the animals that were lured in.

In addition, certain sites were also fitted with motion detector cameras. When an animal passed close enough, the camera was able to catch it on film.

The results of his study on how animals use culverts and under crossings attracted national attention.