Hills For Everyone (HFE) was formed in 1978 and to this day continues to be an organization of “firsts.” Our mission is to protect the unique, rare, and disappearing landscapes in the Puente-Chino Hills. These hills lie at the juncture of Southern California’s four most populous counties: Los Angeles, Orange, Riverside, and San Bernardino.

Our first goal was the creation of Chino Hills State Park (CHSP). In our earliest years, to urge creation of the State Park, volunteers documented the natural resources and presented hundreds of slide shows. Members even designed the Park boundaries for the Feasibility Study requested by the State Legislature. By designing the Park along ridgeline boundaries, we originated a design strategy that protected the watershed and the viewshed. Once within the ridgelines, the visitor is protected from the sights and sounds of urban life that dominate on the other side of the ridgelines.

Volunteers became involved in planning processes of local government in four counties. We opposed projects that damaged the evolving Park and supported decisions that protected it. Scores of land use battles were fought to protect the emerging Park. We have successfully fought off an international airport, arterial highways, private toll roads, ridgeline developments, sewage treatment plants, and numerous housing projects. 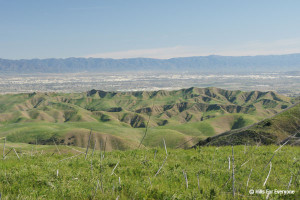 While advocating for CHSP, HFE members educated elected officials about the value of open space in this highly urbanized region. A bipartisan and bicameral coalition of state legislators secured funds through five Park Bond Acts that our volunteers worked to pass. With over 30 separate acquisitions the State has spent over $100 million to acquire 14,000 acres, making it the most complicated and expensive state park in California history. Since the Park lies within an hour’s drive of over half the state’s population, a wilderness experience is now available to people who might not otherwise be able to afford one.

When the State could not afford park operation (even though acquisition had begun), HFE volunteers offered to operate the Park. Between 1982-84, it was opened for limited public use. This endeavor marked the first time in state history that a non-profit group of volunteers was entrusted with such a task.

Though our earliest goal was the creation and completion of CHSP, we have since widened our vision. With our increased understanding of the principles of conservation biology and the need to save large landscapes to preserve the region’s rich biodiversity, we are working to permanently protect and link remaining critical parcels of undeveloped land in the Puente-Chino Hills ecosystem.

Our region’s parklands have been featured in National Geographic (October 2000), Sunset Magazine (January 2001), and Discover Magazine (September 2002), as well as hundreds of newspaper articles over the years. To maintain the existing backbone of open space in the hills, we have formed partnerships across the hills and have helped establish the Wildlife Corridor Conservation Authority. This authority consists of four cities, one county, three state agencies, and two public members. It is the first joint powers authority in the State whose mission is to connect natural lands.

CHSP protects 14,000 acres in the eastern part of the hills, while another 4,000 acres in the west have been saved because of Whittier’s leadership. After combining forces in 1995 with activists on the western side of the hills, HFE coordinated efforts to secure funds to buy Coal Canyon Biological Corridor. Two parcels of land comprised the last remaining linkage between the entire hillside system and the Santa Ana Mountains at Coal Canyon. State Parks purchased the first parcel in October 2000 for $40 million. The second parcel was secured in July 2001 for $13.5 million. The cooperative effort engaged the support of two governors, dozens of elected officials at all levels of government, numerous governmental agencies, and hundreds of citizens.

Without the Coal Canyon connection, the entire Puente-Chino hillside system would have become “an island” and, over time, a steep decline in native species would have occurred due to a limited gene pool and loss of large predators. According to Drs. Reed Noss, Paul Beier, and Bill Shaw:

“Restoring a natural linkage in what is now a roaded underpass would set a global precedent. We are aware of no other restored biological corridor of this type and scale. Conservation-minded citizens throughout the world could look to Coal Canyon as an inspiring example of how an ecological error was corrected through thoughtful public action.”

The acquisition of Coal Canyon was the first time in state history that a state agency purchased land solely to connect two large landscapes. It represented a watershed moment in State Park history because the State now realizes that all of its existing parks are at risk of becoming “islands of habitat.” Subsequently, acquisitions have been reprioritized and State Parks is leading the effort to identify other critical connections in the State.

The Puente-Chino Hills Wildlife Corridor is a landscape people can relate to. No towering redwoods or dramatically carved landscapes dwarf visitors. Instead, visitors feel welcomed by the hills, as if they are coming home. Children who have never run down a hill are coming to the Park. Seniors can visit the land and know that it is the only slice of this region that will stay untouched for their grandchildren.

We continue to work to keep these hills, hills for everyone, forever.