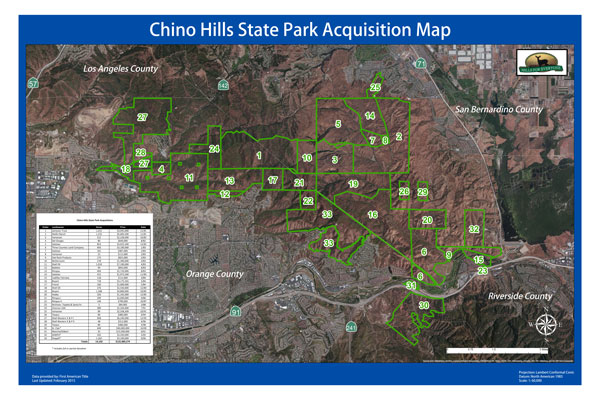 Excerpts from testimony at the City of Chino Hills meeting on 2/17/15 provided by Hills For Everyone Executive Director Claire Schlotterbeck:

“I am here to tonight to clarify a few items regarding the state park. I know the last meeting was a bit heated and I prefer to add light rather than heat so I chose not to speak that night. However, I do want to provide clarifying information tonight.

The State Park has been created with 33 separate acquisitions, all by willing sellers. It is the most complicated set of acquisitions in State Park history. The project has received the support of democrats and republicans alike in four counties for 35 years.

As you may recall, an international airport was proposed for Chino Hills but those legislators believed the region deserved a State Park and they worked cooperatively to send funding our way.

I have provided you with a map of the order of acquisitions. The Park is still growing. When there is a resource like a state park, it becomes a magnet for different ways to add to it other than outright purchase.

There seemed to be some concern about the two parcels that are rectangles that are within the Lamb property (26 and 29). That land was owned by Texaco and before them by Getty Oil. Texaco was very willing to add the land to the State Park.

The other property that generated interest was the one by 71 – No.32.  It was acquired by the state as mitigation for Lewis homes projects to the east. Two early park supporters, Fred Aquiar and Larry Walker came to the dedication ceremony in 2005.”