It’s Over. We Won Madrona. 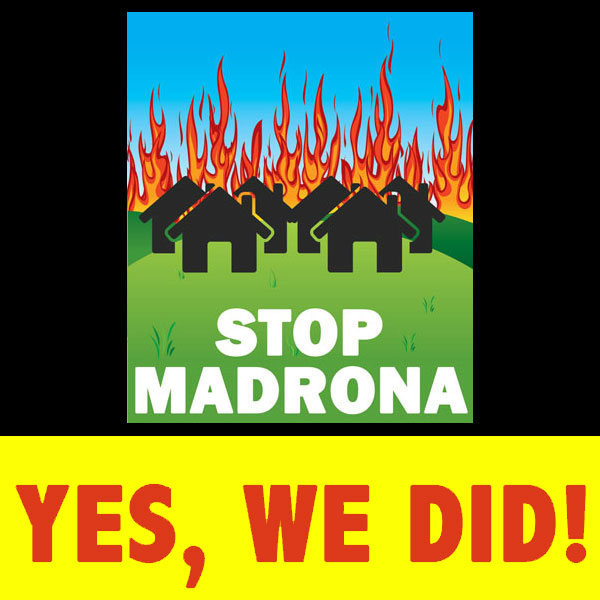 The California Supreme Court has just turned down the developer’s request for review of the Madrona Project.   Game Over.  We won.

After a 17 year battle to stop Madrona, a dangerous hillside development of 162 houses deep in the fire prone Carbon Canyon area of Brea, conservationists are celebrating a final victory. Hills For Everyone (and its co-petitioners) won at the Superior Court level in November 2015; we won at the Appellate Court level in October 2017, and we won today.  All we ever asked was that the City of Brea follow its own rules.

The City will now need to be ordered by the Superior Court Judge to revoke all approvals it granted for the project in June 2014.

Hills For Everyone, the non-profit that founded Chino Hills State Park, has led the battle to stop the project which would have been located next to the State Park. Madrona would have put 1,600 more cars a day on the overburdened two lane Carbon Canyon Road and it would have put people in harm’s way on a hilltop that has burned to the ground four times in 30 years. Madrona would have consumed more than five times the average daily water use of other Brea residents to maintain a green moat around it. The project would also have disrupted the only documented mountain lion corridor between Orange and Los Angeles County and would have removed 1,400 oak and walnut trees.

Thanks again to Stop Madrona Team members for their years of hard work: Eric Johnson, Jebb Harris, Bev Perry, Melanie Schlotterbeck, and Duane and Luz Thompson.  More thanks to the many hosts of our fundraisers—the Grinsteads, Hodsons, Reeds, Stricklins, Thompsons, and Ullrichs. And our deep gratitude goes to our donors—from across the hills—that supported this cause.

Caretaking and stewardship now has a stronger toehold in our little corner of the world tonight.