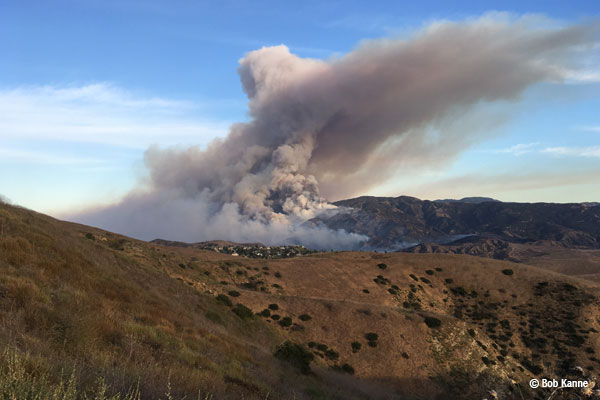 8:58 AM – OCFA reports it is holding steady at 2,500 acres, but now there are 520+ firefighters on-scene. At sunrise the fixed wing aircraft started up again. Two injuries have been reported. Multiple homes still threatened.

9:38 PM – KTLA reports the fire is up to 2,000 acres and is 5% contained. Areas in the Dominguez Ranch and Green River developments (both in Corona) are being evacuated. Winds are at 25 MPH. OCFA reports one structure burned with multiple homes threatened in Corona.

6:35 PM – Wind have shifted it is moving towards Corona. It is over 700 acres according to TV reports. There are over 200 firefighters on the fire. There are now seven aircraft.

2:09 PM – The fire is confirmed by visuals from OCFA and CBS Los Angeles to be in Chino Hills State Park at Coal Canyon.

Monday 1:51 PM – There is a fire along the south side of the 91 Freeway near the Orange County/Riverside County border. OCFA is on-scene. It is consider a two alarm fire. Chino Hills State Park has been notified.